A Hopeful Note in the Wake of Disaster: Lessons from a Small Town in Kansas 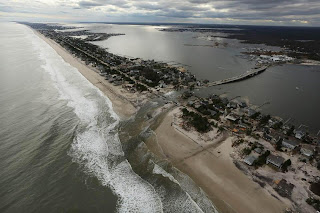 Nearly all my family and oldest friends live somewhere along the East Coast, so naturally I have been consumed over the last few days by the news and images of hurricane Sandy. The devastation is shocking, sad, and unsettling. It is certainly difficult to find anything positive to report on the situation, and yet, standing at a distance, I am feeling hopeful that something positive might come from the catastrophe.


First,  I hope that coming so close to the election, this disaster will draw some political attention to an issue that has been noticeably absent from the discussion: that of climate change. There is little doubt that our choices, individually and as a nation, have contributed to global warming and global warming is contributing to colossal shifts in our weather patterns. In the end, as Sandy and others before her have so poignantly punctuated, mother nature will prevail. It is time to show some respect. If we don't, we won't have an economy, health care initiatives or jobs numbers to worry about.

Second, I hope that in the face of such devastation, people will be able to come together and think creatively about sustainable options for the future. Sometimes, when things are stripped bare, our prime concerns come into a sharper focus and we have the incentive needed to create meaningful change.

I have seen transformation of this sort in my small towns work. In 2007 the tiny, conservative farming town of Greensburg, KS was obliterated by an EF5 tornado that destroyed 95% of the town. Within a week, a soft-spoken man -a transplant from the liberal enclave of Denver- delivered a concept paper to state and municipal officials suggesting that the town rebuild to LEED- platinum standards. Remarkably, in the wake of complete and utter devastation, folks who might normally find themselves on opposite sides of the political aisle were able to find common ground and creatively and energetically come together to create something positive and lasting. They were able to construct a sustainable future together as the municipality led the way for homeowners and businesses. Fueled by 10 wind turbines, the lessons learned in a small Kansas town have now undulated outward, creating a legacy. The people of Greensburg have reached out with support and guidance to others across the nation who have been touched by similar disasters. And while it may seem implausible that the East Coast, teeming with industry and humanity alike could have much to learn from a humble Midwestern town, the shared plight of humanity would suggest otherwise.

It is my hope that, as we rebuild up and down the East Coast, we will respect the power of mother nature and give credence to the models that have done so before.  Ultimately, by treading lightly in the face of this tremendous tragedy with have an extraordinary opportunity to improve.